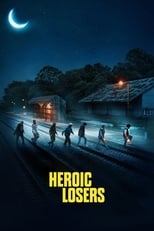 Director Sebastián Borensztein CastRicardo Darín, Luis Brandoni & Chino DarínRelease Aug 15th, 2019 Synopsis Heroic Losers or La odisea de los giles in Spanish is a 2019 Argentine heist film co-written and directed by Sebastián Borensztein, based on the novel La noche de la Usina (The Night of the Heroic Losers) by Eduardo Sacheri, who wrote the screenplay. It features an ensemble cast including Ricardo Darín, Luis Brandoni, Chino Darín, Verónica Llinás, Daniel Aráoz, Carlos Belloso, Marco Caponi, Rita Cortese, and Andrés Parra. Set during the during the 1998–2002 Argentine great depression, the film is about a group of people from a small town trying to recover the money they lost from the government’s policies. Heroic Losers is directed by Sebastián Borensztein and was released on Aug 15th, 2019.

Where can you stream Heroic Losers: Not yet streaming online DVD/Bluray via Amazon