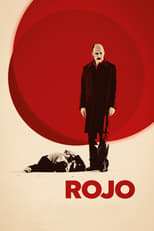 Director Benjamín Naishtat CastDarío Grandinetti, Andrea Frigerio & Alfredo CastroRelease Jul 12th, 2019 Synopsis “Red” in English, Rojo is set in Argentina in 1975 during its darkest days when those opposed to the regime would disappear. The film is directed by Benjamin Nasihtat and stars Dario Grandinetti as Claudio, a law-abiding citizen who turns a blind eye to the repression. Naishtat based it on his own family history: his grandmother was was a victim, and a number of the photographs viewers see in the vacant home are those of Naishtat’s relatives. Naishtat scratches the surface of this society, so that the paranoia and estrangement lurking beneath the refined exteriors become very clear. Rojo is directed by Benjamín Naishtat and was released on Jul 12th, 2019.

Where can you stream Rojo: