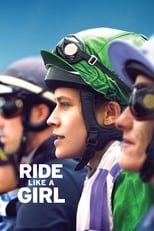 Director Rachel Griffiths CastTeresa Palmer, Sam Neill & Sullivan StapletonRelease Mar 13th, 2020 Synopsis Ride Like a Girl is a 2019 Australian biographical sports drama directed by Rachel Griffiths and starring Teresa Palmer and Hollywood star Sam Neill. It is based on the true to life story of Michelle Payne (Palmer), the first female jockey to win the Melbourne Cup in 2015. The film has received mixed reviews from critics. The film while formulaic, at times cheesy, avoids much of the controversy that swirls around the racing industry. It is big on determination, grit and passion displayed by Payne.
Ride Like a Girl has a huge heart, and that is enough to carry it over the finish line. Ride Like a Girl is directed by Rachel Griffiths and was released on Mar 13th, 2020.