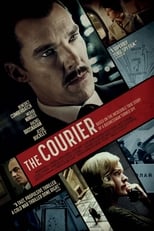 Director Dominic Cooke CastBenedict Cumberbatch, Rachel Brosnahan & Jessie BuckleyRelease Mar 19th, 2021 Synopsis Dominic Cooke directs while Tom O’Connor writes the drama, Ironbark, a 2020 Sundance Film Festival entry. It stars Benedict Cumberbatch, Rachel Brosnahan, Jessie Buckley, Merab Ninidze, Angus Wright, and Kirill Pirogov. FilmNation Entertainment and SunnyMarch produced the drama that premiered on January 24, 2020. Roadside Attractions and Lionsgate bought the distribution rights to the film. They have yet to set a release date for the film. The film brought the cast to Prague and London where majority of the film was shot. Ironbark is directed by Dominic Cooke and was released on Mar 19th, 2021.

Where can you stream Ironbark: Not yet streaming online