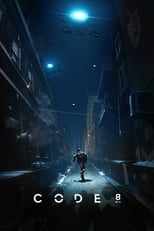 Director Jeff Chan CastRobbie Amell, Stephen Amell & Sung KangRelease Dec 13th, 2019 Synopsis Jeff Chan directs and produces this sci-fi thriller with Robbie Amell in the lead role. Code 8 was actually a short film that came out in 2016, which was the handiwork of brothers Robbie and Stephen Amell (of Arrow fame). After raising USD 2 million, they produced the full-length film from the screenplay of Chris Pare. It was produced by Colony Pictures and distributed by XYZ Films. It debuted in 2017 via the Berlin International Film Festival and was also featured in 2019 at the Sitges Film Festival. The film grossed USD 20.6 million against a budget of USD 29.2 million.
Code 8 is directed by Jeff Chan and was released on Dec 13th, 2019.

Where can you stream Code 8: Not yet streaming online