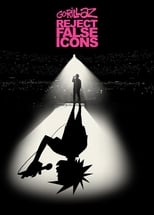 Director Denholm Hewlett CastDamon Albarn, Jamie Hewlett & Vince StaplesRelease Dec 16th, 2019 Synopsis Denholm Hewlett took on the directing job for the musical-documentary of Gorillaz: Reject False Icons. The movie shows the 3-year journey of the band, Gorillaz, during the production of their hit albums The Now Now and Humanz, and their world tour. Hewlett, Jaime Hewlett’s son, is given an all-access pass to studio sessions and recordings and concert behind the scenes. The documentary was shown on December 16, a one-night only screening at cinemas worldwide.
Gorillaz: Reject False Icons is directed by Denholm Hewlett and was released on Dec 16th, 2019.

Where can you stream Gorillaz: Reject False Icons: Not yet streaming online