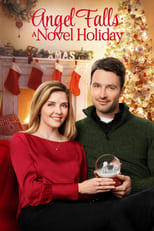 Director Jonathan Wright CastJen Lilley, Carlo Marks & Eric CloseRelease Dec 13th, 2019 Synopsis From director Jonathan Wright and writers David Golden, Samantha Hernan, and Melissa de la Cruz bring you a TV movie for Christmas, Angel Falls: A Novel Holiday. Starring Jen Lilley, Carlo Marks, and Eric Close, this romance film can be seen on Hallmark Movies and Mysteries. The film is seen as a sequel to Christmas in Angel Falls, a movie that came out in 2017, as some characters from that movie are retained in A Novel Holiday. The movie was shot on location in Canada.
Angel Falls: A Novel Holiday is directed by Jonathan Wright and was released on Dec 13th, 2019.

Where can you stream Angel Falls: A Novel Holiday: Not yet streaming online