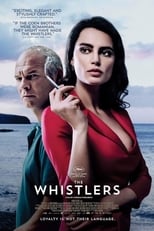 Director Corneliu Porumboiu CastVlad Ivanov, Catrinel Marlon & Rodica LazărRelease Feb 28th, 2020 Synopsis Written and directed by Corneliu Porumboiu, The Whistlers (Romanian title: La Gomera) is a crime thriller shot in Romania and the Canary Islands. It is produced by 42 Km Film, Komplizen Film, and Les Films du Worso and distributed by mk2. It stars Vlad Ivanov and Catrinel Marlon. It joined the 2019 Cannes Film Festival and was entered in the 92nd Academy Awards for Best International Feature Film. It is set to be released in the US in February 2020. Curzon Artificial Eye will take care of the film’s distribution in the UK. It premiered in Romania in September 2019. The Whistlers is directed by Corneliu Porumboiu and was released on Feb 28th, 2020.

Where can you stream The Whistlers: Not yet streaming online