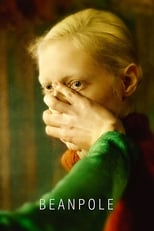 Director Kantemir Balagov CastViktoriya Miroshnichenko, Vasilisa Perelygina & Konstantin BalakirevRelease Jan 29th, 2020 Synopsis Beanpole (Original title: Dylda; Russian: Дылда) is a war drama written and directed by Kantemic Balagov. Balagov was awarded the Un Certain Regard Best Director at the 2019 Cannes Film Festival. He also received the FIPRESCI Prize for Best Film. It also made the December shortlist of the 92nd Academy Awards for Best International Feature Film. Aleksandr Terekhov co-writes the film produced by Non-Stop Production. It is set to be released on January 29, 2020 in the US. The film stars Viktoria Miroshnichenko, Vasilisa Perelygina, Konstantin Balakirev, and Andrey Bykov. Miroshnichenko was nominated for the Best Actress award at the European Film Award.
Beanpole is directed by Kantemir Balagov and was released on Jan 29th, 2020.

Where can you stream Beanpole: Not yet streaming online