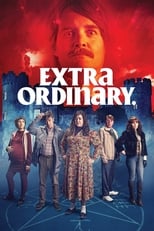 Director Mike Ahern, Enda Loughman CastMaeve Higgins, Barry Ward & Will ForteRelease Mar 6th, 2020 Synopsis This comedy-horror film from Ireland is about a driving instructor named Rose who is gifted with supernatural abilities. Although she has a love-hate relationship with her powers, she rises to the occasion to save a Sarah, the daughter of a lonely man from a rock star who wants to use her for Satanic purposes. The film is regarded as a “teasy-cozy” version of Ghostbusters and has received positive reviews, including Rotten Tomatoes which gave it 100 rating. The film is directed by Mike Ahern and Enhda Loughman and stars Maeve Higgins as Rose Dooley, the gifted driving instructor. Extra Ordinary is directed by Mike Ahern, Enda Loughman and was released on Mar 6th, 2020.

Where can you stream Extra Ordinary: