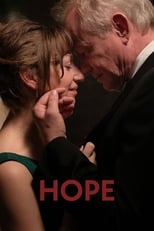 Director Maria Sødahl CastStellan Skarsgård, Andrea Bræin Hovig & Elli Rhiannon Müller OsbourneRelease Nov 22nd, 2019 Synopsis Tomas and Anja, a couple with a large blended family has grown apart. When the wife is diagnosed with terminal brain cancer, their life breaks down and exposes neglected love. They have to tread a thin line between exposing their own unfulfilled dreams and intimate confessions without hurting each other. Ultimately, they have to decide whether there is still any hope for their love, as life rarely gives anyone a second chance. Hope is an extremely intimate story which, through a life-threatening event, reveals the feelings of a couple that was previously in denial, forcing them to face their evident yet well-hidden problems. Hope is directed by Maria Sødahl and was released on Nov 22nd, 2019.

Where can you stream Hope: Not yet streaming online