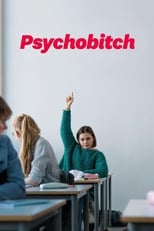 Director Martin Lund CastJonas Tidemann, Elli Rhiannon Müller Osbourne & Saara Sipila-KristoffersenRelease Jan 11th, 2019 Synopsis Martin Lund helms and pens the Norwegian drama, Psychobitch. This film centers on classmates with clashing personalities Frida and Marius who are assigned to work together which leads to a turbulent relationship. Some say it is similar to the Hollywood film Pretty in Pink. Jonas Tidemann plays Marius and Elli Muller Osbrone is Frida. It won the Commerzbank Audience Award from the Filmfest Hamburg under the Eurovisuell section. It was also screened at the Zlin Film Festival, Schlingel Film Festival, and the La Roche-sur-Yon International Film Festival. It was released in Norway in January 2019 through the distribution of Indie Sales. It grossed USD 1.08 million. Psychobitch is directed by Martin Lund and was released on Jan 11th, 2019.

Where can you stream Psychobitch: Not yet streaming online