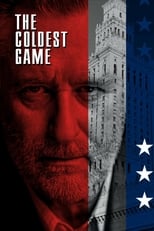 Director Lukasz Kosmicki CastBill Pullman, Lotte Verbeek & Nicholas FarrellRelease Feb 8th, 2020 Synopsis Bill Pullman leads the cast in this spy film. Lukasz Kosmicki directs and writes the spy thriller. Pullman is joined by Lotte Verbeek, James Bloor, and Robert Wieckiewicz. Marcel Sawicki co-writes the screenplay. Piotr Wozniak-Starak served as a producer in the film that is believed to be his last before he figured in a boating accident. Watchout Studio, TVN, Next Film, ITI Neovision, Big City Outdoor, The Story Lab, Poreczenia Kredytowe, and Galeria Olsnienia Go produced the film that garnered the nods of critics. It was screened at the Gydnia Film Festival in September 2019 and was shown in Polish theaters in November the same year. Its international release is set in 2020.
The Coldest Game is directed by Lukasz Kosmicki and was released on Feb 8th, 2020.

Where can you stream The Coldest Game: