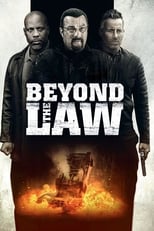 Director James Cullen Bressack CastSteven Seagal, Johnny Messner & DMXRelease Dec 6th, 2019 Synopsis Steven Seagal stars in the action movie, Beyond the Law, directed by James Cullen Bressack. Chad Law and Johnny Martin Walters tag team to write the screenplay of the movie. Seagal is joined by Johnny Messner and DMX. Charach Productions, BondIt Media Capital, Scotty Geltz and UFO Pictures produced the film for an estimated USD 7 million. It is distributed by Cinedigm and it began its US theater run on December 6, 2019.
Beyond The Law is directed by James Cullen Bressack and was released on Dec 6th, 2019.

Where can you stream Beyond The Law: