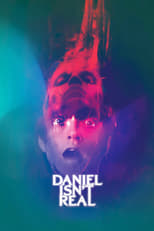 Director Adam Egypt Mortimer CastMiles Robbins, Patrick Schwarzenegger & Sasha LaneRelease Dec 6th, 2019 Synopsis In This Way I Was Saved written by Brian DeLeeuw is the inspiration for the film Daniel Isn't Real. Adam Egypt Mortimer directed the psychological horror, which he also co-writes with DeLeeuw. Miles Robbins, Patrick Schwarzenegger, Sasha Lane, Mary Stuart Masterson, Hannah Marks, Chukwudi Iwuji, and Peter McRobbie star in the thriller. Elijah Wood takes on a producer role for this production. SpectreVision and ACE Pictures produced the film that was distributed by Samuel Goldwyn Films. It came out in the US on December 6, 2019 but it was first screened at South by Southwest in March 2019.
Daniel Isn’t Real is directed by Adam Egypt Mortimer and was released on Dec 6th, 2019.

Where can you stream Daniel Isn’t Real: