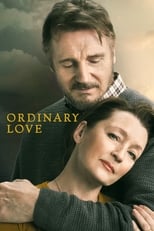 Director Lisa Barros D'Sa, Glenn Leyburn CastLiam Neeson, Lesley Manville & David WilmotRelease Feb 14th, 2020 Synopsis Liam Neeson and Lesley Manville topbill the romantic drama movie, Ordinary Love. Owen McCafferty wrote the screenplay while Lisa Barros D'Sa and Glenn Leyburn directed the film. David Wilmot and Amit Shah offer support to Neeson and Manville in the film. The flick was screened at the Toronto International Film Festival and was released in theaters on December 6, 2019 in the UK. It was produced by Bankside Films, Out of Orbit, Canderblinks Film, Tempo Productions, Head Gear Films, the British Film Institute, and Northern Ireland Screen, and distributed by Bleecker Street and Focus Features. American audiences will get to watch it in theaters starting February 14, 2020.
Ordinary Love is directed by Lisa Barros D'Sa, Glenn Leyburn and was released on Feb 14th, 2020.

Where can you stream Ordinary Love: