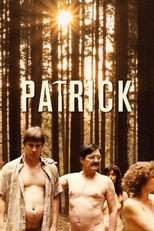 Director Tim Mielants CastKevin Janssens, Pierre Bokma & Hannah HoekstraRelease Aug 28th, 2019 Synopsis Director Tim Mielants of 'Peaky Blinders' makes his feature film debut with a tragicomedy set in a nudist colony in the Ardennes. The film stars Kevin Janssens as Patrick, a 30-something individual whose family runs a nudist camp where things go out of hand after his domineering father dies. Mielants shows a real talent combining comedy and tragedy, with flashes of weird humor and some exciting twists and turns. He treats all nudity casually it becomes a non-issue after a few minutes. The film also stars Pierre Bokma, Ariane van Vliet, Hannah Hoekstra, Jemaine Clement, Bouli Lanners, and Josse De Pauw. De Patrick is directed by Tim Mielants and was released on Aug 28th, 2019.

Where can you stream De Patrick: Not yet streaming online