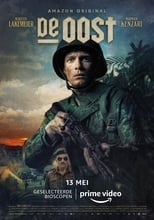 Director Jim Taihuttu CastMarwan Kenzari, Huub Smit & Jonas SmuldersRelease Apr 1st, 2021 Synopsis This soon-to-be-released film is set in Indonesia (Dutch East Indies) after World War II where the Dutch colonizers tried to restore their rule as the local population were pushing for independence. Central to this story is a Dutch soldier named Johan who idolizes his officer Captain Westerling whose repression of Indonesians puts Johan in a moral dilemma. The movie stars Marwan Kenzari (who played Jafar in live-action film Aladdin) and Martijn Lakemeier. The movie scheduled for release in the spring of 2020. Producer New Amsterdam will then set up a major information campaign about the Indonesian War of Independence in collaboration with the East West Foundation and the Indian Remembrance Center. De Oost is directed by Jim Taihuttu and was released on Apr 1st, 2021.

Where can you stream De Oost: Not yet streaming online