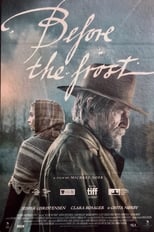 Director Michael Noer CastJesper Christensen, Magnus Krepper & Ghita NørbyRelease Jan 10th, 2019 Synopsis Before the Frost or For Frosten in Danish, is a drama film directed by Michael Noer and stars Jesper Christensen. It is about a struggling old Danish farmer forced to choose between selling off his land to another wealthy farmer or marry off his daughter in exchange for an alliance with a neighbor to escape poverty. Noer’s bleak vision of Denmark’s patriarchal culture in the past makes quite an impact. Before the Frost is truly captivating, thanks to the superb acting of Christensen and the rest of the cast. It was screened in the Contemporary World Cinema section at the 2018 Toronto International Film Festival. Before the Frost is directed by Michael Noer and was released on Jan 10th, 2019.

Where can you stream Before the Frost: Not yet streaming online