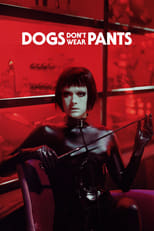 Director J.-P. Valkeapää CastKrista Kosonen, Pekka Strang & Ester GeislerováRelease Sep 22nd, 2020 Synopsis Dogs Don't Wear Pants or in Finnish, Koirat eivat kayta housuja, is a 2019 drama film directed by J.P. Valkeapaa. It tells about a surgeon who has lost his focus following the death of his wife. His life would drastically change after encountering a dominatrix. Critics claim Fifty Shades Of Gray has nothing on this film which is an expedition to the dark side of the sexual psyches of two different people. Strangely enough, it is unusually non-confrontational. Valkeapaa teases with touches of dark humor which should seduce audiences. It was screened in the Directors' Fortnight section at the 2019 Cannes Film Festival. Dog’s Don’t Wear Pants is directed by J.-P. Valkeapää and was released on Sep 22nd, 2020.

Where can you stream Dog’s Don’t Wear Pants: