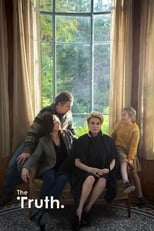 Director Hirokazu Koreeda CastCatherine Deneuve, Juliette Binoche & Ethan HawkeRelease Jul 3rd, 2020 Synopsis The Truth or La Verite is a 2019 French-Japanese drama film, written and directed by Hirokazu Kore-eda. It stars Catherine Deneuve, Juliette Binoche, Ethan Hawke, Ludivine Sagnier, Clémentine Grenier, Manon Clavel, Alain Libolt, Christian Crahay and Roger Van Hool. It is Kore-eda's first film set outside Japan and not in his native language. It is about the stormy relationship between Fabienne, a famous actress and her daughter Lumir. The film had its world premiere at the Venice on August 28, 2019. It was released in Japan on October 11 by GAGA Pictures, and in France on December 2019 25 by Le Pacte.
The Truth is directed by Hirokazu Koreeda and was released on Jul 3rd, 2020.

Where can you stream The Truth: