The Most Beautiful Couple 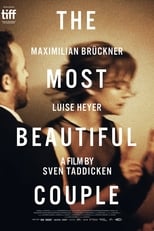 Director Sven Taddicken CastMaximilian Brückner, Luise Heyer & Florian BartholomäiRelease May 2nd, 2019 Synopsis The Most Beautiful Couple or Das schönste Paar in German is a 2018 drama film directed by Sven Taddicken and stars Maximilian Bruckner and Luise Hayer. It is about a couple Liv and Malte who were victimized while on vacation and Liv was raped. The film focuses on how the couple faces the challenge of coping after that traumatic incident. The film acknowledges the toxicity of human reactions to trauma where one is still dwelling on it while the other chooses to move on. It was screened in the Contemporary World Cinema section at the 2018 Toronto International Film Festival.
The Most Beautiful Couple is directed by Sven Taddicken and was released on May 2nd, 2019.

Where can you stream The Most Beautiful Couple: Not yet streaming online