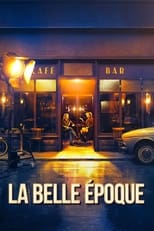 Director Nicolas Bedos CastDaniel Auteuil, Guillaume Canet & Doria TillierRelease Oct 2nd, 2020 Synopsis The film is a French romantic comedy film, directed by Nicolas Bedos and released in 2019. The film stars Daniel Auteuil as Victor, an elderly man whose long marriage to Marianne, played by Fanny Ardant, is on the rocks. In order to rekindle their marriage, he performs in an unusual stage play reenacting the early stage of their relationship. Bedos’ film is a very charming movie that plunges its audience into nostalgia. Strangely, the director himself did not experience this period. La Belle Epoque is a witty and very funny romantic comedy that is sure to be a crowd-pleaser if given the opportunity.
La Belle Époque is directed by Nicolas Bedos and was released on Oct 2nd, 2020.

Where can you stream La Belle Époque: Not yet streaming online