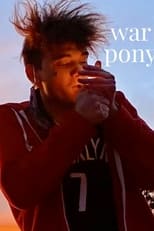 Director Gina Gammell, Riley Keough CastJojo Bapteise Whiting, LaDainian Crazy Thunder & Robert StoverRelease May 21st, 2022 The interlocking stories of two Lakota boys growing up on Pine Ridge Reservation. At 23, Bill just wants to make something of himself. Meanwhile, 12-year-old Matho can’t wait to become a man. Bound by their shared search for belonging, each of the boys grapple with identity, family, and loss, as they navigate their unique paths to manhood.
War Pony is directed by Gina Gammell, Riley Keough and was released on May 21st, 2022.

Where can you stream War Pony: Not yet streaming online