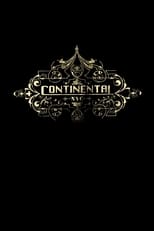 CastMel Gibson, Peter Greene, Colin Woodell, Jeremy BobbNetwork Starz Air Date Dec 31st, 2021 As a spin-off of the hit film trilogy John Wick. This series will focus on the hotel chain that is home to the world's league of assassins.

Where can you stream The Continental? DVD/Bluray via Amazon