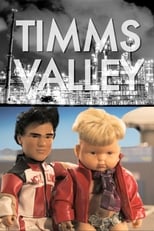 CreatorSteve ConradCastChris Pratt, Hank Azaria & John LithgowNetwork AMC Air Date Dec 31st, 2021 Our story, unfolding via the stop-motion animation of baby dolls repurposed as a grown-up cast of characters, hinges on an investigation into the mysterious disappearance of fictional metropolis Mega City’s most famous magnate. Two intrepid detectives follow the case, rallying to fight against their city’s dangerous corruption, at a high cost to themselves and their families, all in pursuit of...

Where can you stream Mega City Smiths? DVD/Bluray via Amazon