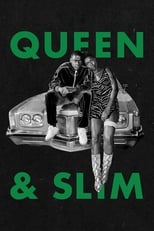 Director Melina Matsoukas CastDaniel Kaluuya, Jodie Turner-Smith & Chloë SevignyRelease Nov 27th, 2019 Synopsis Award-winning music video and movie director Melina Matsoukas submits her feature film directorial debut, Queen and Slim, to the AFI Fest, which premiered on November 14, 2019. The romance drama came out on US theaters on November 27 of the same year. Lena Waithe writes the screenplay off of the novel she wrote with James Frey. The cast is led by Daniel Kaluuya, as Slim, and Jodie Turner-Smith, as Queen. They are supported by Bokeem Woodbine, Chloe Sevigny, Flea, Sturgill Simpson, and Indya Moore. Universal Pictures handles the distribution of the film produced by 3BlackDot, Bron Creative, Makeready, De La Revolucion Films, and Hillman Grad Productions. It grossed USD 44 million at the box office from a budget of USD 17 to 20 million. Queen and Slim is directed by Melina Matsoukas and was released on Nov 27th, 2019.

Where can you stream Queen and Slim: