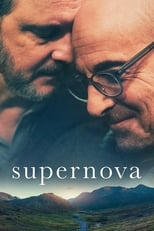 Director Harry Macqueen CastColin Firth, Stanley Tucci & James DreyfusRelease Nov 20th, 2020 Sam and Tusker, partners of 20 years, are traveling across England in their old RV visiting friends, family and places from their past. Since Tusker was diagnosed with early-onset dementia two years ago, their time together is the most important thing they have. As the trip progresses, however, their ideas for the future clash, secrets come out, and their love for each other is tested as never...
Supernova is directed by Harry Macqueen and was released on Nov 20th, 2020.

Where can you stream Supernova: Not yet streaming online