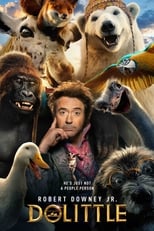 Director Stephen Gaghan CastRobert Downey Jr., Antonio Banderas & Jessie BuckleyRelease Jan 17th, 2020 Synopsis An eccentric scientist is sent to a mythological island to find a cure for the queen's illness. On his voyage, he is accompanied by a bunch of talking animals. Dolittle is directed by Stephen Gaghan and was released on Jan 17th, 2020.

Where can you stream Dolittle: Not yet streaming online DVD/Bluray via Amazon