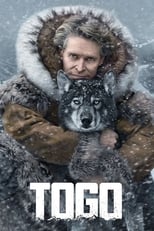 Director Ericson Core CastWillem Dafoe, Thorbjørn Harr & Michael GastonRelease Dec 20th, 2019 Synopsis Togo is set during the 1925 serum run to Nome, also known as the "Great Race of Mercy," in which dog-sled teams relayed to transport diphtheria antitoxin serum through harsh weather conditions over nearly 700 miles to save the Alaskan town of Nome and the surrounding communities from an epidemic. The title is derived from one of the sled dogs raised by Leonhard Seppala who also raised Balto, probably the better-known dog involved in the Serum Run. Togo was initially considered too old and weak to take part. Despite his inferiority, Togo displayed fearlessness that made him a hero as he led his team through the unforgiving landscape. Togo is directed by Ericson Core and was released on Dec 20th, 2019.

Where can you stream Togo: