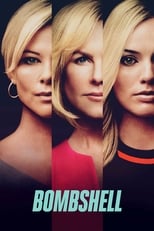 Director Jay Roach CastCharlize Theron, Nicole Kidman & Margot RobbieRelease Dec 20th, 2019 Synopsis Charlize Theron, Margot Robbie, and Nicole Kidman topbill the biographical drama, The Bombshell. Written by Charles Randolph and directed by Jay Roach, Bombshell also stars John Lithgow, Kate McKinnon, Connie Britton, Malcolm McDowell, and Allosan Janney. Bron Creative, Annapurna Pictures, Denver + Delilah Productions, Gramsci, Lighthouse Management & Media, and Creative Wealth Media produced the drama for USD 32 million, which was released by Lionsgate. It started its theatrical run in the US on December 13, 2019, and earned USD 25.1 million. It garnered nominations for Theron for Best Actress - Drama and for Robbie for Best Supporting Actress from the Golden Globes. They also got individual nominations, along with Kidman at the Screen Actors Guild, not to mention a nomination for Outstanding Performance by a Cast in a Motion Picture.
Bombshell is directed by Jay Roach and was released on Dec 20th, 2019.

Where can you stream Bombshell: