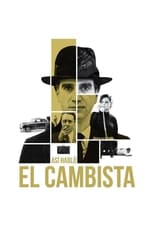 Director Federico Veiroj CastDaniel Hendler, Dolores Fonzi & Luis MachínRelease Sep 26th, 2019 Synopsis Federico Veiroj takes on the directorial task for The Moneychanger (Spanish title: Asi hablo el cambista). Veiroj co-writes the story with Martin Mauregui and Arauco Hernandez Holz. It stars Daniel Hendler, Dolorez Fonzi, Benjamin Vicuna, and German de Silva. It was entered as the Uruguayan entry to the 92nd Academy Awards for Best International Feature Film. It also did the rounds in international film festivals, like in Toronto, Spain (San Sebastian), Zurich, New York, and Chicago. It was released in Uruguay, Argentina, and Germany in September 2019 (Uruguay). The Moneychanger is directed by Federico Veiroj and was released on Sep 26th, 2019.

Where can you stream The Moneychanger: Not yet streaming online