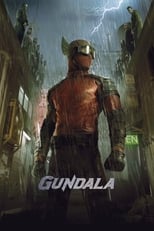 Director Joko Anwar CastAbimana Aryasatya, Tara Basro & Bront PalaraeRelease Aug 29th, 2019 Synopsis This Indonesian superhero movie centers on the character named Sancaka who has lived on the streets since his father died and his mother left him. One day, he was struck by lightning while fighting thugs and is given super powers allowing him to harness electricity. He would take the name Gundala which means "Thunder" in Ancient Javanese. Despite his powers, Sancaka is torn between staying out of trouble or using his powers to defend the weak. Abimana Aryasatya plays the title character and the movie is directed by Joko Anwar. Outside Indonesia, it premiered in the 2019 Toronto International Film Festival. Gundala is directed by Joko Anwar and was released on Aug 29th, 2019.

Where can you stream Gundala: Not yet streaming online DVD/Bluray via Amazon