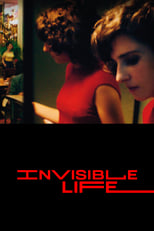 Director Karim Aïnouz CastCarol Duarte, Julia Stockler & Fernanda MontenegroRelease Dec 20th, 2019 Synopsis The Invisible Life of Eurídice Gusmão or A Vida Invisível in Portuguese is a 2019 Brazilian–German drama film directed by Karim Aïnouz based on the novel of the same title by Martha Batalha. It is set in Rio de Janeiro in the 1950s, centering on two sisters battling the bigotry and oppression of Brazil’s patriarchal society. It was screened in the Un Certain Regard section at the 2019 Cannes Film Festival where it won the Golden Palm Award. It was selected as Brazil’s entry for the Best Foreign Language Film at the 92nd Academy Awards. Invisible Life is directed by Karim Aïnouz and was released on Dec 20th, 2019.

Where can you stream Invisible Life: '