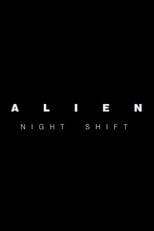 Director Aidan Brezonick CastTerrance Keith Richardson, & Release Apr 12th, 2019 When a missing space trucker is discovered hungover and disoriented, his co-worker suggests a nightcap as a remedy. Near closing time, they are reluctantly allowed inside the colony supply depot where the trucker’s condition worsens, leaving a young supply worker alone to take matters into her own hands. Alien: Night Shift is one of six short films produced to celebrate the 40th anniversary of...
Alien: Night Shift is directed by Aidan Brezonick and was released on Apr 12th, 2019.

Where can you stream Alien: Night Shift: Not yet streaming online

Stay up to date with the streaming options of Alien: Night Shift & other streaming releases