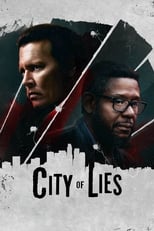 Director Brad Furman CastJohnny Depp, Forest Whitaker & Toby HussRelease Dec 21st, 2018 Los Angeles Police Department detective Russell Poole has spent years trying to solve his biggest case -- the murders of The Notorious B.I.G. and Tupac Shakur -- but after two decades, the investigation remains open. Jack Jackson, a reporter desperate to save his reputation and career, is determined to find out why. In search of the truth, the two team up and unravel a growing web of institutional...
City of Lies is directed by Brad Furman and was released on Dec 21st, 2018.

Where can you stream City of Lies: Not yet streaming online