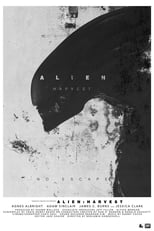 Director Benjamin Howdeshell CastJessica Clark, Agnes Albright & Adam SinclairRelease Apr 26th, 2019 The surviving crew of a damaged deep-space harvester have minutes to reach the emergency evacuation shuttle. A motion sensor is their only navigation tool leading them to safety while a creature in the shadows terrorizes the crew. However, the greatest threat might have been hiding in plain sight all along. Alien: Harvest is one of six short films produced to celebrate the 40th anniversary of...
Alien: Harvest is directed by Benjamin Howdeshell and was released on Apr 26th, 2019.

Where can you stream Alien: Harvest: Not yet streaming online

Stay up to date with the streaming options of Alien: Harvest & other streaming releases