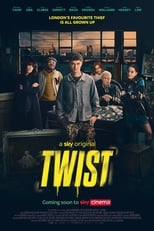 Director Martin Owen CastRaff Law, Michael Caine & Lena HeadeyRelease TBA A Dicken’s classic brought thrillingly up to date in the teeming heartland of modern London, where a group of street smart young hustlers plan the heist of the century for the ultimate payday.
Twist is directed by Martin Owen and was released on TBA.

Where can you stream Twist: Not yet streaming online