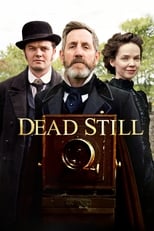 Network RTÉ One Air Date Dec 31st, 2019 Dublin, 1880. Photo studios may be booming, but photographing the recently deceased is losing its appeal. Renowned memorial photographer Brock Blennerhasset’s business is failing. He turns to his niece and a new assistant as sinister competition emerges in the form of a serial killer with a macabre interest in photographing his victims. As the body count mounts, the trio race to stop a murderer...

Where can you stream Dead Still? DVD/Bluray via Amazon

On 2020-05-18 Comedy/Crime TV Series Dead Still first aired on RTÉ One. Written and created by , and produced by Deadpan Pictures & Shaftesbury Films, Dead Still will return and was last broadcasted on 2020-06-15.
IMDb Rating: /10 Dead Still Official page on RTÉ OneAll Seasons: 1 All Episodes: 6 Average Episode length: 45 minutes Seasons Season 1 - 2020-05-18 with 6 Episodes
The Healing Powers of Dude
Darklands
We use cookies to ensure that we give you the best experience on our website. If you continue to use this site we will assume that you are happy with it.Ok