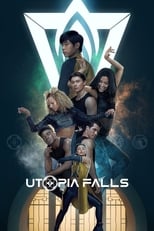 CreatorR.T. ThorneCastRobyn Alomar, Robbie Graham-Kuntz & Phillip LewitskiNetwork CBC Television Air Date Feb 14th, 2020 In a genre bending take on a coming of age story, a group of teens in a distant future colony uncover an ancient forbidden archive of historical, cultural and musical relics. This discovery forces them to question everything they've been taught, and use the power of music to ignite change in their reality to expose the truth.

Where can you stream Utopia Falls? DVD/Bluray via Amazon