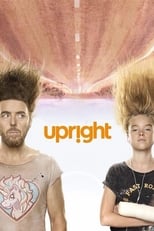 CreatorMatthew SavilleCastTim Minchin, Milly Alcock & Daniel LapaineNetwork showcase Air Date Dec 1st, 2019 When family outcast Lucky Flynn learns that his mother is dying, he decides to drive to the other side of Australia to see her, packing nothing but an upright piano for the journey. But his plans are soon turned upside down when he meets the runaway teenager Meg, who’s dealing with some family demons of her own.

Where can you stream Upright? DVD/Bluray via Amazon