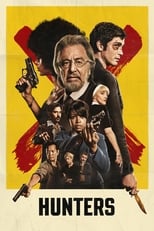 CreatorDavid WeilCastLogan Lerman, Al Pacino & Jerrika HintonNetwork Amazon Air Date Feb 21st, 2020 A diverse band of Nazi Hunters living in 1977 New York City discover that hundreds of high ranking Nazi officials are living among us and conspiring to create a Fourth Reich in the U.S. The eclectic team of Hunters set out on a bloody quest to bring the Nazis to justice and thwart their new genocidal plans.

Where can you stream Hunters? DVD/Bluray via Amazon

On 2020-02-21 Drama TV Series Hunters first aired on Amazon. Written and created by David Weil, and produced by Monkeypaw Productions & Sonar Entertainment, .
IMDb Rating: /10 Hunters Official page on AmazonAll Seasons: 1 All Episodes: 1 Average Episode length: minutes Seasons Season 1 - 2020-02-21 with 1 Episodes
Star Trek: Picard
The White Wall
We use cookies to ensure that we give you the best experience on our website. If you continue to use this site we will assume that you are happy with it.Ok