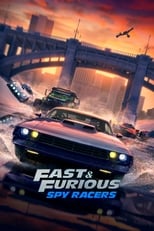 Where can you stream Fast & Furious Spy Racers? DVD/Bluray via Amazon