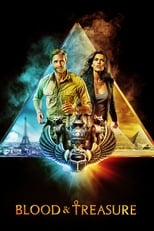 Where can you stream Blood & Treasure?

On 2019-05-21 Drama/Action & Adventure TV Series Blood & Treasure first aired on CBS. Written and created by Matthew Federman & Stephen Scaia, and produced by CBS Television Studios & Propagate Content, Blood & Treasure will return and was last broadcasted on 2019-08-06.
IMDb Rating: /10 Blood & Treasure Official page on CBSAll Seasons: 1 All Episodes: 12 Average Episode length: 40 minutes Seasons Season 1 - 2019-05-21 with 12 Episodes
How to Sell Drugs Online (Fast)
Mr. Nobunaga’s Young Bride
We use cookies to ensure that we give you the best experience on our website. If you continue to use this site we will assume that you are happy with it.Ok