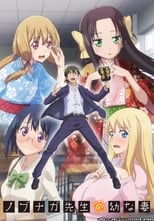 Middle school teacher Nobunaga has always been dreaming of such a gal game-like situation. However, the one who appeared before him was Kichou, a 14-year-old girl who proclaims herself as his wife. Appears to have arrived from the Sengoku era, she mistakes Nobunaga as Nobunaga Oda and urges him to conceive a child with...

Where can you stream Mr. Nobunaga’s Young Bride? DVD/Bluray via Amazon

Netflix
Stay up to date with the streaming options of Mr. Nobunaga’s Young Bride & other streaming releases