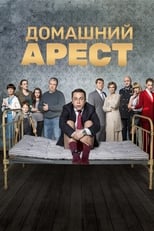 CreatorSemyon SlepakovCastPavel Derevyanko, Алеся Подоляк & Алексей УстиновNetwork TNT Air Date Aug 16th, 2018 The current mayor of the city of Sineozersk, Arkady Anikeev, is caught catching bribes on a large scale. By court decision, he is under house arrest at the place of registration. His wife broke up with him, who owned all his property. Once in a communal apartment, Anikeev confronts Ivan Samsonov, with whom he lived in an apartment as a child. Leaving aside the differences, Anikeev decides to help...

Where can you stream Domashniy arest? DVD/Bluray via Amazon