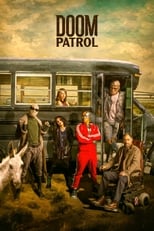 CreatorGreg BerlantiCastTimothy Dalton, April Bowlby & Diane GuerreroNetwork DC Universe Air Date Feb 15th, 2019 The Doom Patrol’s members each suffered horrible accidents that gave them superhuman abilities — but also left them scarred and disfigured. Traumatized and downtrodden, the team found purpose through The Chief, who brought them together to investigate the weirdest phenomena in existence — and to protect Earth from what they find.

Where can you stream Doom Patrol? DVD/Bluray via Amazon

On 2019-02-15 Sci-Fi & Fantasy/Action & Adventure TV Series Doom Patrol first aired on DC Universe. Written and created by Jeremy Carver, and produced by Mad Ghost Productions & Berlanti Productions, Doom Patrol will return and was last broadcasted on 2019-05-24.
IMDb Rating: 8.0/10 Doom Patrol Official page on DC UniverseAll Seasons: 1 All Episodes: 15 Average Episode length: 60 minutes Seasons Season 1 - 2019-02-15 with 15 Episodes
Miracle Workers
The Enemy Within
We use cookies to ensure that we give you the best experience on our website. If you continue to use this site we will assume that you are happy with it.Ok