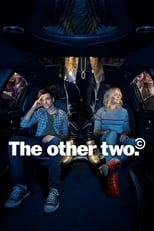 Where can you stream The Other Two?

On 2019-01-24 Comedy TV Series The Other Two first aired on Comedy Central. Written and created by Sarah Schneider & Chris Kelly, and produced by Broadway Video & Jax Media, The Other Two will return and was last broadcasted on 2019-03-28.
IMDb Rating: /10 The Other Two Official page on Comedy CentralAll Seasons: 1 All Episodes: 10 Average Episode length: 20 minutes Seasons Season 1 - 2019-01-24 with 10 Episodes
Unspeakable
Bloom