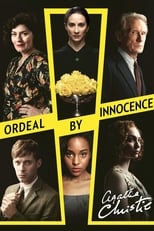 CreatorN/ACastBill Nighy, Anthony Boyle & Anna ChancellorNetwork BBC One Air Date Apr 1st, 2018 The black sheep of the Argyll family, Jack Argyll, was accused of murdering their matriarch a year ago, but now a man shows up on their doorstep claiming Jack’s innocence. The family must come to terms with this news and the fact that the real killer might still be among them.

Where can you stream Ordeal by Innocence? DVD/Bluray via Amazon