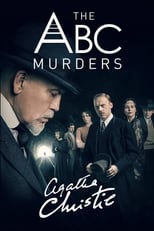 CreatorN/ACastJohn Malkovich, Rupert Grint & Shirley HendersonNetwork BBC One Air Date Dec 26th, 2018 It's 1933, and an older and greyer Hercule Poirot has fallen out of the public eye. When he receives anonymous letters threatening murder, he must take matters into his own hands.

Where can you stream The ABC Murders? '